The First Mini Whip at UBA-SNW ?

After an intense search on the Internet for a simple antenna for HF-SDR reception (10kHz-30MHz) I came across this Mini-Whip from maker PA0RDT, which can be found in many variations. The guys from the Dutch Unief Twente also use this antenna for their Web SDR. Since it is an active antenna, I was quite skeptical because of my previous experiences in this kind of antennae were rather disappointing. About 20 years ago, there was once a free printout from Elektuur, with which you could make an active (indoor) antenna, with a sliding blade. That was not really a success, and the whole ended up in the junk bin. I didn't really know how it worked at the time, and had not yet heard about malfunctions in the house. After it was exactly reproduced according to Elektuur, it didn't work very well either.
Conclusion: You must have seen some of the Mini-Whip theory to understand it.
Let me put it this way: this whip antenna does NOT work indoors anymore these days. 20 to 30 years ago. The interfering radiation inside the house is simply too strong nowadays. More on this later.
But yes, I had now started building my own antenna, a Mini-Whip. I thought let's get it right right away. So I made a PCB design with a PCB design program, and drew a schematic in there too, and then the results were printed out, and a PCB was made.

Click on the figure for a bigger view
The schedule is as you can find many on the internet. There is almost no variation. The actual antenna is a copper plate of about 3x4 cm. This image represents a capacitance of approximately 10pF, and is single sided. This is coupled to a J-FET Type J310, which has a fairly high input capacitance of approximately 3pF. This is also a low-noise amplifier, with a signal decoupling from the power supply behind it. The 2nd transistor, type TRW80181, is an old VHF RF transistor, which was used in cable TV amplifiers. Another good HF / VHF transistor is also good (eg 2N5109), as long as it can draw around 120mA emitter current.
The main task of this 2nd transistor is to form an impedance converter on the cable to the receiver.
The power can be supplied over the coaxial cable on the receiver side, and is disconnected from the signal line via a coil.
It is also best to make a small print for this whole. Between the antenna PCB and the power PCB you can use either a 75 or 50 Ohm coax cable with BNC plugs.
The coaxial cable (+/- 1m) coming from the receiver is soldered directly to the power supply PCB (Pad3 = signal, Pad2 and 4 = GND). Power supply: Pad1 = + 9V, Pad2 = GND.
The impedance seen by the receiver has been estimated to be around 100 ohms.

The PCB layout: HF circuit board and power supply PCB

Please note that the coil of 10µH, you do not see, is placed on the copper side.

A little theory
Why does this antenna only work outdoors?
To understand this we have to look at some physical features. There are electrical and magnetical fields in the air. This active antenna is only sensitive to the electric field in the air. The antenna surface is a copper plate, and this forms a very small capacitance with the air. We must realize that in the city, and in our homes, for the last 25 to 30 years, we live in an enormous electro-magnetic radiation, coming from different devices, such as our (dect) telephone, computer, baby monitor, almost all plug-in power supplies, fluorescent lamps, LED lamps, WiFi and many other things. This radiation is even on and in our light network, in the electric wires, and in the earth wires thereof. This entire network of wires forms a interference antenna, which is present throughout the house. So we live in fairly strong electro-magnetic radiation, which prevents other weaker signals from outside to receive, with a sensitive recipient such as e.g. an SDR receiver. They are there, but they are completely pushed away by the interference radiation in the house, which is stronger.
A receiver does not distinguish between bad and good signals: the weak signals are mixed with the disturbance in the house, and practically disappear.
In other words: the strong interference radiation in a house has a high noise value, and the weak RF signals that we want to receive have a low noise value. In this low-noise amplifier, the weak signals do not exceed the strong interference, so we do not get them will hear in our receiver. The only solution to this is to find a way to reduce this interference radiation (noise), so that our receiver will be able to receive the weaker, distant signals enough. With this knowledge, we can do a number of physical measurements, with sometimes surprising results.
Many already know that there are generally two types of field antennas: one type (most window antennas) better receive the electrical field in the air.
The other types (usually Loop antennas) receive better the magnetic field in the air.
Now certain measurements reveal some surprises. Magnetic (loop) antennas, installed indoor, receive a mass interference in the house, but can still work a little, because this loop antenna, sharp, with a rotary capacitor must be tuned to a very narrow frequency band. And that is not really useful for HF broadband reception. Window antennas do not have this tuning capacitor and receive all the interference radiation indoors the entire HF band.
But now it comes: with various measurements of magnetic and electrical radiation inside and outside, It has been found that the magnetic interference field largely stays INSIDE our house, so within the walls. The electric fields are less affected by this. This means that we are some distance from our home can already receive better distant signals, and the interference fields from our house will already be a lot weakened. This makes the use of e.g. a window antenna, a lot better outside.
A wire, e.g. a window antenna, behaves primarily as a capacitance at the lower frequencies.
If you know this science, this can also be applied to a 'whip' antenna, active or not. And so he will easily receive the electric field in the air.
If this is also known, one can look out for other, similar types of antennas. It turns out that a small Whip antenna works the most capacitively. This gives rise to replacing the blade with a "capacity", or simply a copper plate. And it works ! And so the MiniWhip was born, although not much remains of the "Whip", but the name has stuck. A disadvantage could be that the receiving part of the antenna, the copper plate, is quite small, and the signals received will also be very small. Actually that is also true, but we use a FET that is very sensitive to small signals. And it works, as long as the interference fields in the area are sufficiently small enough and stay within the houses. Measurements show that the very best RF reception will be approximately 100m from buildings. But that is absurd. Most of us do not reach that distance. However, it has been found that it is possible to receive RF signals from a few meters away from buildings.
The farther the distance from buildings, of course, the better the reception will be.
A note: a MiniWhip must be free in the air. This means that when using a metal pole, the MiniWhip must be placed ON TOP of the pipe, NOT cousins, or along the pipe. If necessary, use a small piece of plastic extension tube on the mast to mount the MiniWhip on it.
The MiniWhip must therefore be connected to the metal mast via a separate earth wire.
Construction
No major problems are to be expected with the construction. My first test version was made from junk box parts. The antenna coax cable (RG-58) was about 10m long, but it can also be a regular TV or SAT cable of 75 Ohm. I have not been able to show any difference in signal strength between the two.
Testing
The first test was done with a 9V clip battery, connected directly to the HF PCB. Later you can make the splitter / power PCB and connect it to the end of the coax in the house, and connect the 9V battery or a 9V power adapter to it. The antenna cable has a BNC plug on both ends, which fits both the antenna PCB and the power supply PCB. A piece (1m) of coax is soldered directly to the power supply PCB, and the other side goes to your receiver, also with a BNC or the correct connector or adapter that fits your receiver.
Photos in practice :
Click on the photo for a bigger view
The receiver


The intention was to use this antenna for SDR reception, so that was also tested.
We use a PC or a Laptop, with the HAM program HDSDR (or another), with which we can make a number of observations and pseudo can take measurements. To be able to compare, we do the opposite: we try to find the best signal reception with an outdoor setup, after which we systematically get closer to the house, and see what happens to the signal.

Receiver screen, outside at 4 meters from the house in the open air: 
A good test is to look for some Dutch medium wave stations, which are sometimes difficult to receive during the day. On the screen we see the reception of NL Radio5 at 1,800kHz, which is quite good.

Reception screen, 2 meters from the house, under a plastic roof: 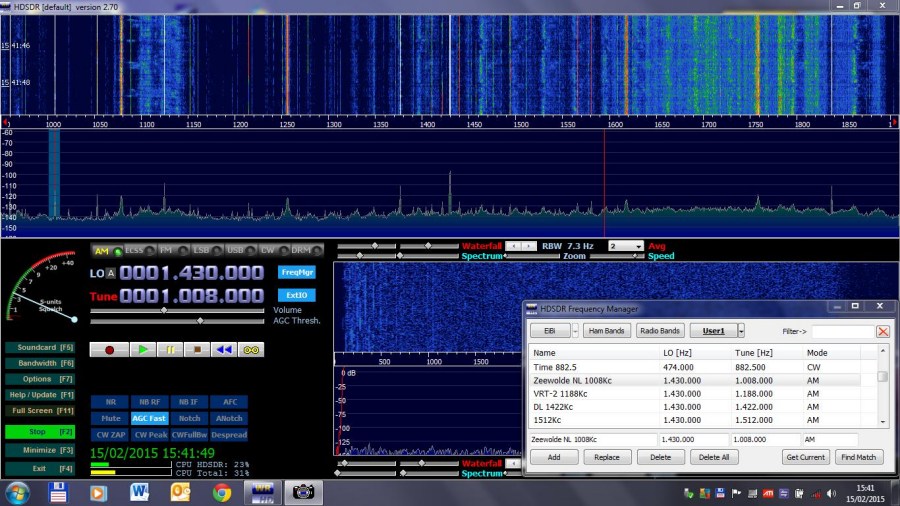 Click on photo for a bigger view
Here we see that the reception at 1,800kHz is already strongly weakened. French stations, which are very strong, continue to be well received.

Reception screen, 1 meter from the house, under a plastic roof: 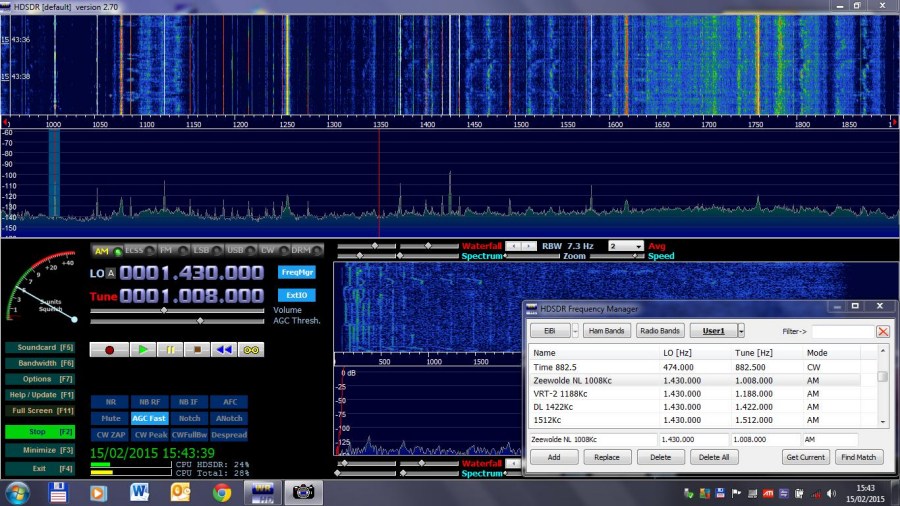 At 1m from the outer wall we see that the NL station has almost completely disappeared. You can already see here that the interference is getting stronger, due to the shape of more, and stronger "noise" curtains.

Indoor reception screen at 2 meters from the window: 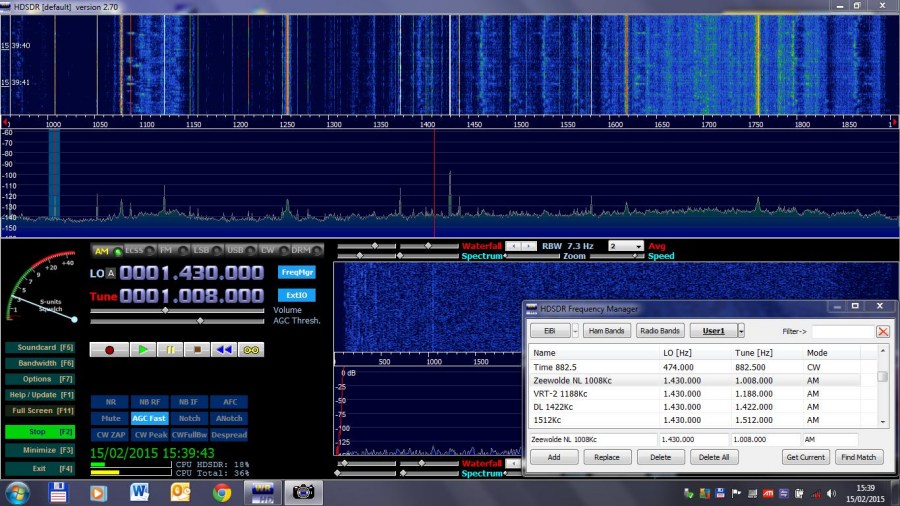 
Inside the house, the reception is very poor. More interference radiation can be seen, and there are no more clear signals. French stations are also practically unavailable.

Some frequency bands:  Time transmitters such as DCF77 (77.5kHz) and also 60kHz must be well received during the day. The 40m band could be better, if there are conditions, but a few CW and Phone signals can already be seen here.

The 10MHz www time channel comes through weak (is better in the evening), and there are also a few CW and Voice stations.
At 21MHz, the 10m band, with many nice CW signals and Voice stations.
This shows that the antenna is still working above 21MHz.

Here is the MiniWhip power supply OFF: look what a difference! There is nothing more than false noise signals and noise pulses to be seen. 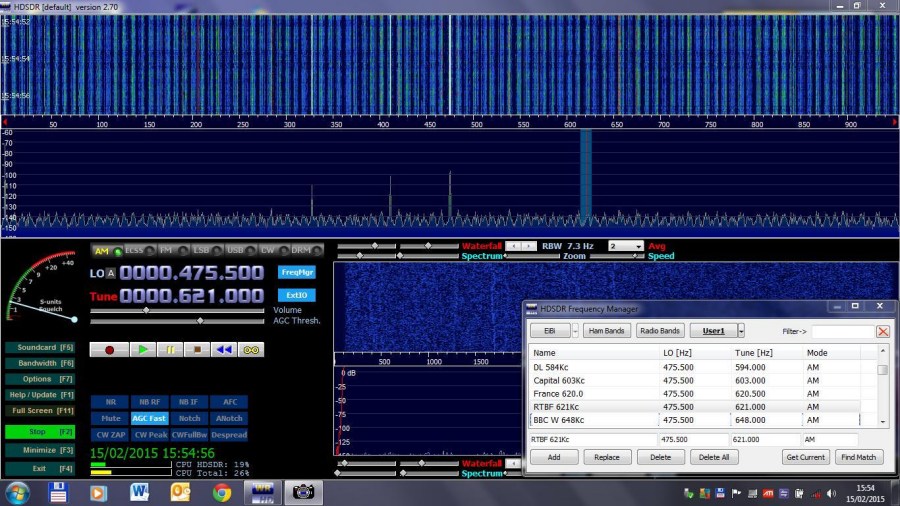 
This antenna is made for use with my SDR HF UP-convertor :